↓
About Us
We have been owned by wonderful Golden Retrievers for 19 years now. When we moved into our first house i wanted a pet dog and worked with a lady who owned Goldens. She told me so many lovely stories about her dogs that i decided to do some research on the breed and see if it would be the right choice for us.
We decided it would be, and we went looking for a puppy.
Oscar came to live with us on Halloween 1999.  He was a lovely gentle boy who loves his cuddles. When Oscar was 7 months old we decdied to go along to a local companion dog show. He won Most Appealing Puppy, and thats where it all started. We tried a few Open shows but it soon became clear Oscar wasn’t really good enough to be a proper showdog!  So he went to some more fun shows, won lots more prizes and then along came his partner in crime……..Lennon (Putjade Paperback Writer for Lovissa) . Lennon was shown lightly and had some success but an injury as a baby pup meant i was unable to show him for very long. He did however, excel in obedience. He gained his Bronze, Silver and Gold Good Citizen awards before he was 15 months old. Oscar and Lennon are both now at rainbow bridge and are missed every day.
July 2002 saw the arrival of our first girl and my foundation bitch. Putjade Peachy Keen for Lovissa. She fulfilled all my dreams and became my first dog ever to qualify for Crufts, she had my first litter, and gained my first Stud Book Number. She has given me many years of pleasure and fun in the show ring and is adored and is a real princess at home…………..and she knows it!!!!!!
All of our current girls go back to Peaches and her sister Fanta.
So that was the start of Lovissa Goldens.
We hope for many more years with our wonderful dogs and i’m sure a few newcomers will be making their prescence felt over the years to come. 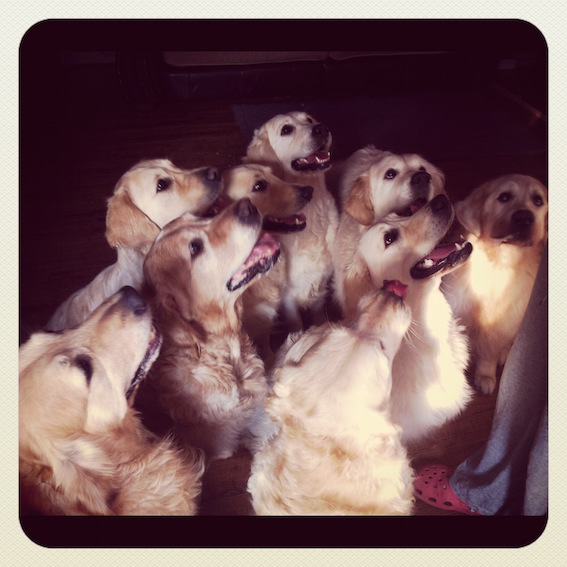